The second chapter in Partners for Preservation is ‘Curbing the Online Assimilation of Personal Information’ by Paulan Korenhof. Given the amount of attention being focused on the right to be forgotten and the EU General Data Protection Regulation (GDPR), I felt it was essential to include a chapter that addressed these topics. Walking the fine line between providing access to archival records and respecting the privacy of those whose personal information is included in the records has long been an archival challenge. ... 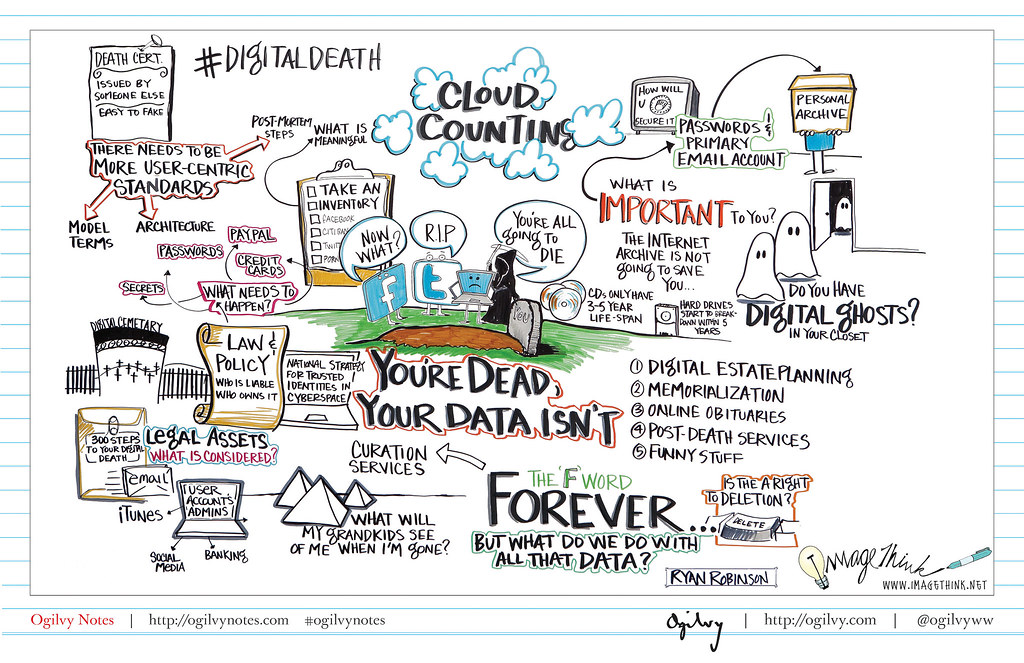 The first chapter in Partners for Preservation is ‘Inheritance of Digital Media’, written by Dr. Edina Harbinja. This topic was one of the first I was sure I wanted to include in the book. Back in 2011, I attended an SXSW session titled Digital Death. The discussion was wide-ranging and attracted people of many backgrounds including lawyers, librarians, archivists, and social media professionals. I still love the illustration above, created live during the session. ...

Overview of Partners for Preservation This friendly llama (spotted in the Flickr Commons) is here to give you a quick high-level tour of Partners for Preservation.

The book’s ten chapters have been organized into three sections:

As I recruited authors to write a chapter, the vision for each individual chapter evolved. Each author contributed their own spin on the topic I originally proposed. There were two things I had hoped for and was particularly pleased to have come to pass. First was that I learned new things about each of the fields addressed in the book. The second was discovering threads that wove through multiple chapters. While the chapters are each freestanding and you may read the book’s chapters in any order you like, the section groupings were designed to help highlight common threads of interest to archivists focused on digital preservation. ...

Countdown to Partners for Preservation Yes. I know. My last blog post was way back in May of 2014. I suspect some of you have assumed this blog was defunct.

When I first launched Spellbound Blog as a graduate student in July of 2006, I needed an outlet and a way to connect to like-minded people pondering the intersection of archives and technology. Since July 2011, I have been doing archival work full time. I work with amazing archivists. I think about archival puzzles all day long. Unsurprisingly, this reduced my drive to also research and write about archival topics in the evenings and on weekends. ... Caffè Lena opened in Saratoga Springs, NY in May of 1960. Since then, the coffee house has kept its doors open featuring predominately performances by folk musicians. Often the performers were at the start of their careers. The café has featured now familiar songwriters including Bob Dylan, Arlo Guthrie, Ani DiFranco, and Kate and Anna McGarrigle - to name just a few. After the death of the founder, Lena Spencer, in 1989 Caffè Lena was converted to a non-profit institution.

The Caffè Lena History Project has launched an online searchable database for the complete Caffè Lena collection. The processing of this collection was made possible with support from The Andrew W. Mellon Foundation, administered through the Council on Library and Information Resources’ Cataloging Hidden Special Collections and Archives Project. The digitization of the material was made possible through generous funding from the EMC Corporation.

The CODATA Mission: Preserving Scientific Data for the Future This session was part of The Memory of the World in the Digital Age: Digitization and Preservation conference and aimed to describe the initiatives of the Data at Risk Task Group (DARTG), part of the Committee on Data for Science and Technology (CODATA), a body of the International Council for Science.

The goal is to preserve scientific data that is in danger of loss because they are not in modern electronic formats, or have particularly short shelf-life. DARTG is seeking out sources of such data worldwide, knowing that many are irreplaceable for research into the long-term trends that occur in the natural world. ...

Election Eve: Fighting for the Right to Vote

In less than six hours, the polls in Maryland will open for the 2012 general election. Here on ‘election eve’ in the United States of America, I wanted to share some records of those who fought to gain the right to vote for all throughout the USA. Some of these you may have seen before – but I did my best to find images, audio, and video that may not have crossed your path. Why do we have these? In most cases it is because an archive kept them. ...

Harnessing The Power of We: Transcription, Acquisition and Tagging

In honor of the Blog Action Day for 2012 and their theme of ‘The Power of We’, I would like to highlight a number of successful crowdsourced projects focused on transcribing, acquisition and tagging of archival materials. Nothing I can think of embodies ‘the power of we’ more clearly than the work being done by many hands from across the Internet.

Archive Team: The ArchiveTeam describes itself as “a rogue archivist collective dedicated to saving copies of rapidly dying or deleted websites for the sake of history and digital heritage.” Here is an example of the information gathered, shared and collaborated on by the ArchiveTeam focused on saving content from Friendster. The rescued data is (whenever possible) uploaded in the Internet Archive and can be found here:

Springing into action, Archive Team began mirroring Friendster accounts, downloading all relevant data and archiving it, focusing on the first 2-3 years of Friendster’s existence (for historical purposes and study) as well as samples scattered throughout the site’s history – in all, roughly 20 million of the 112 million accounts of Friendster were mirrored before the site rebooted. ...

In honor of the 2012 Day of Digtal Archives, I am posting a link to the UNESCO/UBC Vancouver Declaration. This is the product of the recent Memory of the World in the Digital Age conference and they are looking for feedback on this declaration by October 19th, 2012 (see link on the conference page for sending in feedback).

To give you a better sense of the aim of this conference, here are the ‘conference goals’ from the programme: ... The unconference was framed by this idea:

Processing means different things to an archivist and a software developer. To the former, processing is about taking custody of collections, preserving context, and providing arrangement, description, and accessibility. To the latter, processing is about computer processing and has to do with how one automates a range of tasks through computation. ...