Chapter 10 of Partners for Preservation is ‘Open Source, Version Control and Software Sustainability’ by Ildikó Vancsa. The third chapter of Part III:  Data and Programming, and the final of the book, this chapter shifts the lens on programming to talk about the elements of communication and coordination that are required to sustain open source software projects.

When the Pacific Telegraph Route (shown above) was finished in 1861, it connected the new state of California to the East Coast. It put the Pony Express out of business. The first week it was in operation, it cost a dollar a word. Almost 110 years later, in 1969, saw the first digital transmission over ARPANET (the precursor to the Internet).

Vancsa explains early in the chapter:

We cannot really discuss open source without mentioning the effort that people need to put into communicationg with each other. Members of a community must be able to follow and track back the information that has been exchanged, no matter what avenue of communication is used.

I love envisioning the long evolution from the telegraph crossing the continent to the Internet stretching around the world. With each leap forward in technology and communication, we have made it easier to collaborate across space and time. Archives, at their heart, are dedicated to this kind of collaboration. Our two fields can learn from and support one another in so many ways. 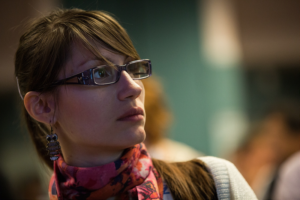 Ildikó Vancsa started her journey with virtualization during her university years and has been in connection with this technology in different ways since then. She started her career at a small research and development company in Budapest, where she focused on areas like system management, business process modeling and optimization. Ildikó got involved with OpenStack when she started to work on the cloud project at Ericsson in 2013. She was a member of the Ceilometer and Aodh project core teams. She is now working for the OpenStack Foundation and she drives network functions virtualization (NFV) related feature development activities in projects like Nova and Cinder. Beyond code and documentation contributions, she is also very passionate about on-boarding and training activities.