It is no surprise that the Library of Congress announcing the publication of images on Flickr is news both in mainstream news outlets and in the blogosphere. From librarian.net‘s short and cheery LoC goes 2.0! post to ArchivesNext‘s pondering Is Flickr “legitimate” for archives now that LOC is there?, I have seen a lot of discussion of LoC and Flickr in my RSS feeds.

What is it all about?

In case you have missed the details, the Library of Congress has published two photo collections on Flickr in a new subsection of the website called The Commons. The two collections are:

I enjoyed reading Flickr’s own blog post on the subject, Many hands make light work. It gave me a glimpse of their vision. For them, these two collections from the Library of Congress make up a pilot project – this is just the first step.

On their page for The Commons they first talk about their goals for the project:

Back in June of 2007, we began our first collaboration with a civic institution to facilitate giving people a voice in describing the content of a publicly-held photography collection.

The key goals of this pilot project are to firstly give you a taste of the hidden treasures in the huge Library of Congress collection, and secondly to show how your input of a tag or two can make the collection even richer.

On the homepage for the Library of Congress Flickr pilot I found this introduction:

The Library of Congress invites you to explore history visually by looking at interesting photos from our collections. Please add tags and comments, too! More words are needed to help more people find and use these pictures.

So, here we have a project between two large and well known organizations, with their goals carefully aligned. Let’s get more people looking at the amazing photos from the Library of Congress. Let’s also harness the curiosity and enthusiasm of those who want to be more involved and want to tag content. I love it!

So then I started looking at photos and the tags they have. I wish (being my database geek self) that I could see the groupings in which tags were added (ie, that one person added tags 3 through 10). They don’t seem to be displayed alphabetically – but rather in the order in which they were added to the photo.

I considered this photo from the 1930s-40s in Color collection: 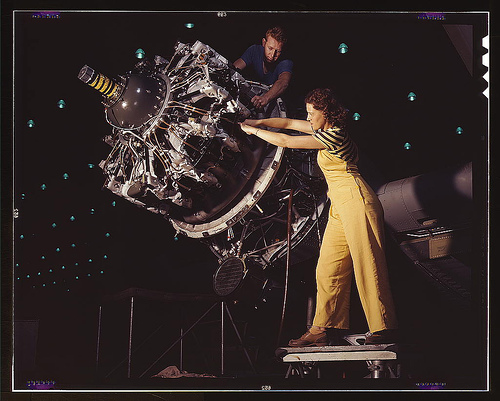 The list below shows all the tags that were assigned to it, in the order in which the tags are displayed beside the photo above on Flickr (listed separated by commas to preserve space). The ‘Library of Congress’ tag has already been assigned to every photo in the collections upon upload, and therefore always appears first:

In a world with no controlled vocabulary, there seems to be a theory at work of covering all your bases. Rather than noticing that someone had tagged this photo ‘WW2’, it was also later tagged with ‘WWII’, ‘World War II’ and ‘world war 2’. On another photo in the collection I know I saw the tag ‘wwii’. As long as there is no ‘offical’ version for this tag, I see the wisdom in tagging it with all of them – just to be sure.

The official description of the photo is: “Women are trained to do precise and vital engine installation detail in Douglas Aircraft Company plants, Long Beach, Calif. (1942 Oct)”. The metadata provided by the Library of Congress also includes information about the format of the film itself.

These are the subject headings assigned by the Library of Congress catalogers:

It is interesting to note that the main things that the independent taggers have captured that the professional catalogers haven’t are either non-topical aspects of the image (‘yellow’ and ‘overalls’) as well as broader more general ideas (‘military aviation’ and ‘technology’).

Does the tag ‘women at work’ tell you more than the LOC subject heading ‘Women–Employment’? Maybe, maybe not – but if you view all the images tagged ‘women at work’ across Flickr, now you can see these women from the 1940s at work beside photos such as three vendors and Bozo village life. Now this is something different. This is knitting threads from the ivory tower of libraries and archives into the communal tapestry that is Flickr. Not only might the addition of the ‘women at work’ tag make these images more accessible to the average person looking for Library of Congress photos – but it also puts these photos in the everyday path of many more people. It brings us firmly back to Flickr’s goal stated above of giving more people a “taste of the hidden treasures in the huge Library of Congress collection”.

Flickr has this to say on The Commons’ home page about copyright:

These beautiful, historic pictures from the Library represent materials for which the Library is not the intellectual property owner. Flickr is working with the Library of Congress to provide an appropriate statement for these materials. It’s called “no known copyright restrictions.”

Hopefully, this pilot can be used as a model that other cultural institutions would pick up, to share and redistribute the myriad collections held by cultural heritage institutions all over the world.

I am with ArchivesNext in hoping that this move by the Library of Congress will give archivists and librarians on the ground in other institutions a bit more ammunition with which to fight for posting their images on Flickr. Copyright is one of the issues that seems to give so many organizations pause – so it is interesting to see this new category having been created specifically for cultural institutions. I like that they link back to the Library of Congress’s official answer about what it means if the catalog record notes ‘No known restrictions on publication’. Flickr also explicitly mentions that “If the pilot works – or, when it works! – we’ll look to allow other interested cultural institutions the opportunity to extend the application of “no known restrictions” to their catalogues.” So clearly “no known copyright restrictions” has been created with cultural institutions in mind.

I am intrigued to see how this progresses. If nothing else is accomplished, more people will certainly see images from the Library of Congress collections than they would have had none of these photos been published on Flickr. Some will even surf back to the Library of Congress website to learn more about their photo collecitons. For the example photo I selected above, there were already subject headings assigned – but for most of the Bain News Service photos all that is available are bits of “unverified data provided by the Bain News Service on the negatives or caption cards”. Every tag that is added improves the chances that an interested party may find the photo they need.

I have posted before about the potential of crowdsourcing. I am in favor of it. Yes, all the tags won’t be perfect. Yes, there will be seven different ways of tagging for World War II. But when all is said and done, more people will find more photos. More eyes will see the treasures that once were only available to those who could get inside temperature and humidity controlled vaults. And more people will have the opportunity to learn a tiny bit more about why cultural institutions like the Library of Congress are great!