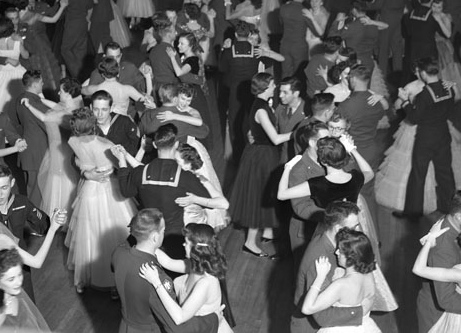 The official title of this session was Getting to the Heart of Performance: Archivists as Creative Collaborators. It was a lovely change of pace. Upon entering this session, we discovered someone tuning a Chinese hammered dulcimer in the middle of a social dance floor. Our hosts were Scott Schwartz of the Sousa Archives and Center for American Music, University of Illinios, Urbana-Champaign and Andrew M. Wentink of Middlebury College Special Collections & Archives. The goals of the session? To teach us about Asian American Jazz fusion and Tango.

Dr. Anthony Brown, of Anthony Brown’s Asian American Orchestra, explained why there was a Chinese hammered dulcimer sitting in the middle of the room. Brown was going to introduce us to Asian and American Jazz fusion. The curator of the Smithsonian’s Duke Ellington Collection from 1992-1996, he discovered materials related to Ellington’s Far East Suite, originally composed to honor the people who welcomed Ellington during his state department tour (cut short by Kennedy’s assasination). Brown was able to trace Ellington’s itinerary through business records and then figure out the instruments that inspired the original in the Asian American Jazz Orchestra’s recording of Far East Suite. His next CD project was Monk’s Moods. The Asian American Jazz Orchestra is now celebrating its 10th anniversary with the release of a CD titled Ten.

Yangqin Zhao plays the Chinese hammered dulcimer and is the formost performer on the instrument in the western hemisphere. The dulcimer travelled via the silk road from persia. The silk road was the original information highway. It was the way east and west were connected in the ancient eras.

Then a recording of Monk’s Moods on piano was played. Then Zhao performed the same piece on the Chinese hammered dulcimer. To achieve this, Brown and Zhao had to work together to translate the original arrangement. Excerpt from Gershwin’s rapsody in blue – recomposition – reorchestrated for his orchestra. A piece of music or a dance chart cannot come to life until you breath life into it. Enabling access to performing arts is different.

The second piece that Zhao played was Andantino from Rhapsody in Blue. Samples of both Andantino and Monk’s Moods are available on the Ten CD page. Zhao then thanked Anthony for teaching her Jazz.

The dance portion of the session was brought to us by Richard Powers of Stanford University Dance Division and his dance partner Joan Walden. Powers founded the Flying Cloud Academy of Vintage Dance. He has a design and creative process degree from Stanford where he is an expert in 19th and early 20th century social dance. Stanford has an extensive dance manuals collections and Powers is the director of Stanford’s 70 member vintage dance ensemble.

Stanford Dance department wanted Richard to make dance more visible on campus to help make sure that it didn’t get cut (partially or completely). Outreach is important – strengthen funding or let potential donors know about you. He recommends that you can bring back dance manuals from your archive. With movies like Mad Hot Ballroom and Shall We Dance? and TV shows like Dancing With The Stars, the American public is predisposed right now to be interested in dancing. Most of the dances in dance manuals were meant for teaching regular people to dance so they could dance with their friends. They were part of a self improvement movement.

Think of unique way to encourage others to use archival records. Powers encourages everyone to NOT hand it off to others. Being a non-dancer gives you a better chance for colloboration. The more we know, the harder it is to get into a true collaboration. But if it is new for you you are more open minded and more open to true collaboration.

There are other resources beyond dance manuals: dance magazines, etiquette books, anti-dance manuals (which sometimes describe the illicit dances that the proper dance manuals won’t mention), novels that give background, journals/diaries/letters, iconography – lithographs, photos, drawings, etchings, sculptures .. to help get the visual idea.. costuming. Dance cards and ball programs give lots of information – when, who.. what music.. maybe where. This also gives you a chance to see which dances were popular (vs the manuals which are promoting dances). Motion pictures from the times. So – how can we weave all of this together?

For more information about how to reconstruct dances, read Powers’ Guidelines for Dance Research and Reconstruction.

We then got a crash course in Tango history. I took notes as fast as I could, but I know I missed a lot along the way. Here are the bits I managed to get down – but don’t trust me to be an authority:

Then they got everyone up and out on the dance floor. We went from learning history and thinking about how to one might decipher dance manuals to actually learning to Tango!

If you are wondering why I am posting this over four months after the conference – you can blame Beaver Archivist’s post about Dancing Archivists. It immediately made me recall the largest gathering of dancing archivists I had personally witnessed. The session itself was really great. It was so far from people sitting in silent rows staring at powerpoint slides (not that there is anything wrong with that) that you might have thought you had wandered into the wrong conference.

It was the takeaway that was especially appealing to me. I really like the idea of finding new ways to bring performance based archives back to life – of finding new ways to reach out to people and make the records sing and dance again. Hearing music reinterpreted and reinvented is of course fundamentally different from seeing sheet music in a glass case. What if every archives that had performance art related records found a way to have two live, participatory events each year? I can only imagine the new audience who might be drawn in to learn about what is hidden in the archives — they might just come back because it is fun. My fingers are crossed that I can get my 2nd Tango lesson in Austin, TX in August 2009.

As is the case with all my session summaries from SAA2008, please accept my apologies in advance for any cases in which I misquote, overly simplify or miss points altogether in the post above. These sessions move fast and my main goal is to capture the core of the ideas presented and exchanged. Feel free to contact me about corrections to my summary either via comments on this post or via my contact form.