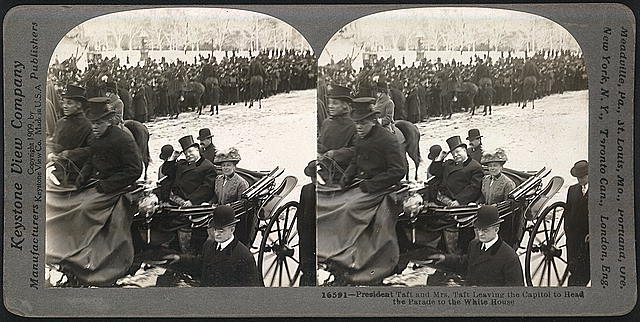 Amazing how much can change in 100 years. In March of 1909, the stereograph above shows African Americans driving the carriage that carried President and Mrs. Taft from the Capitol to lead the inauguration parade to the White House. On January 20th of 2009, Barack Obama will be the guest of honor. The American Folklife Center‘s Inauguration 2009 Sermons and Orations Project aims to collect recordings, transcriptions and ephemera of speeches addressing the significance of the inauguration of Barack Obama as the first African American president.

It is expected that such sermons and orations will be delivered at churches, synagogues, mosques and other places of worship, as well as before humanist congregations and other secular gatherings. The American Folklife Center is seeking as wide a representation of orations as possible.

The Inauguration 2009 project is modeled after prior Library of Congress collection projects. Two great examples of these earlier projects are:

If you want to organize a local recording, here are the basics:

If you want to get a taste of  other recordings held by the Library of Congress, you can spend some time browsing the fantastic list of Collections in the Archive of Folk Culture Containing Sermons and Orations provided on the project site.

So spread the word. Honor the Library of Congress’s goals by helping this collection include the perspectives of as many communities as possible. Your local religious or secular leader could have their point of view preserved as part of a snapshot of our country’s response to the Inauguration of 2009. While they hope for audio and video recordings, they are also accepting text transcriptions – so this doesn’t have to be a high tech endeavor. That said, perhaps this is the inspiration you have been waiting for to learn how to make an audio or video recording!