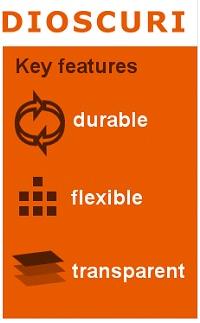 Available Online posted about the open source emulator project Dioscuri back in late September. In the course of researching Thoughts on Digital Preservation, Validation and Community I learned a bit about the Microsoft Virtual PC software. Virtual PC permits users to run multiple operating systems on the same physical computer and can therefore facilitate access to old software that won’t run on your current operating system. That emulator approach pales in comparison with what the folks over at Dioscuri are planning and building.

On the Digital Preservation page of the Dioscuri website I found this paragraph on their goals:

To prevent a digital black hole, the Koninklijke Bibliotheek (KB), National Library of the Netherlands, and the Nationaal Archief of the Netherlands started a joint project to research and develop a solution. Both institutions have a large amount of traditional documents and are very familiar with preservation over the long term. However, the amount of digital material (publications, archival records, etc.) is increasing with a rapid pace. To manage them is already a challenge. But as cultural heritage organisations, more has to be done to keep those documents safe for hundreds of years at least.

They are nothing if not ambitious… they go on to state:

Although many people recognise the importance of having a digital preservation strategy based on emulation, it has never been taken into practice. Of course, many emulators already exist and showed the usefulness and advantages it offer. But none of them have been designed to be digital preservation proof. For this reason the National Library and Nationaal Archief of the Netherlands started a joint project on emulation.

The aim of the emulation project is to develop a new preservation strategy based on emulation.

Dioscuri is part of Planets (Preservation and Long-term Access via NETworked Services) – run by the Planets consortium and coordinated by the British Library. The Dioscuri team has created an open source emulator that can be ported to any hardware that can run a Java Virtual Machine (JVM). Individual hardware components are implemented via separate modules. These modules should make it possible to mimic many different hardware configurations without creating separate programs for every possible combination.

You can get a taste of the big thinking that is going into this work by reviewing the program overview and slide presentations from the first Emulation Expert Meeting (EEM) on digital preservation that took place on October 20th, 2006.

In the presentation given by Geoffrey Brown from Indiana University titled Virtualizing the CIC Floppy Disk Project: An Experiment in Preservation Using Emulation I found the following simple answer to the question ‘Why not just migrate?’:

After reading through Emulation at the German National Library, presented by Tobias Steinke, I found my way to the kopal website. With their great tagline ‘Data into the future’, they state their goal is “…to develop a technological and organizational solution to ensure the long-term availability of electronic publications.” The real gem for me on that site is what they call the kopal demonstrator. This is a well thought out Flash application that explains the kopal project’s ‘procedures for archiving and accessing materials’ within the OAIS Reference Model framework. But it is more than that – if you are looking for a great way to get your (or someone else’s) head around digital archiving, software and related processes – definitely take a look. They even include a full Glossary.

I liked what I saw in Defining a preservation policy for a multimedia and software heritage collection, a pragmatic attempt from the Bibliothèque nationale de France, a presentation by Grégory Miura, but felt like I was missing some of the guts by just looking at the slides. I was pleased to discover what appears to be a related paper on the same topic presented at IFLA 2006 in Seoul titled: Pushing the boundaries of traditional heritage policy: Maintaining long-term access to multimedia content by introducing emulation and contextualization instead of accepting inevitable loss . Hurrah for NOT ‘accepting inevitable loss’.

Vincent Joguin’s presentation, Emulating emulators for long-term digital objects preservation: the need for a universal machine, discussed a virtual machine project named Olonys. If I understood the slides correctly, the idea behind Olonys is to create a “portable and efficient virtual processor”. This would provide an environment in which to run programs such as emulators, but isolate the programs running within it from the disparities between the original hardware and the actual current hardware. Another benefit to this approach is that only the virtual processor need be ported to new platforms rather than each individual program or emulator.

Hilde van Wijngaarden presented an Introduction to Planets at EEM. I also found another introductory level presentation that was given by Jeffrey van der Hoeven at wePreserve in September of 2007 titled Dioscuri: emulation for digital preservation.

The wePreserve site is a gold mine for presentations on these topics. They bill themselves as “the window on the synergistic activities of DigitalPreservationEurope (DPE), Cultural, Artistic and Scientific knowledge for Preservation, Access and Retrieval (CASPAR), and Preservation and Long-term Access through NETworked Services (PLANETS).” If you have time and curiosity on the subject of digital preservation, take a glance down their home page and click through to view some of the presentations.

On the site of The International Journal of Digital Curation there is a nice ten page paper that explains the most recent results of the Dioscuri project. Emulation for Digital Preservation in Practice: The Results was published in December 2007. I like being able to see slides from presentations (as linked to above), but without the notes or audio to go with them I am often left staring at really nice diagrams wondering what the author’s main point was. The paper is thorough and provides lots of great links to other reading, background and related projects.

There is a lot to dig into here. It is enough to make me wish I had a month (maybe a year?) to spend just following up on this topic alone. I found my struggle to interpret many of the Power Point slide decks that have no notes or audio very ironic. Here I was hunting for information about the preservation of born digital records and I kept finding that the records of the research provided didn’t give me the full picture. With no context beyond the text and images on the slides themselves, I was left to my own interpretation of their intended message. While I know that these presentations are not meant to be the official records of this research, I think that the effort obviously put into collecting and posting them makes it clear that others are as anxious as I to see this information.

The best digital preservation model in the world will only preserve what we choose to save. I know the famous claim on the web is that ‘content is king’ – but I would hazard to suggest that in the cultural heritage community ‘context is king’.

What does this have to do with Dioscuri and emulators? Just that as we solve the technical problems related to preservation and access, I believe that we will circle back around to realize that digital records need the same careful attention to appraisal, selection and preservation of context as ‘traditional’ records. I would like to believe that the huge hurdles we now face on the technical and process side of things will fade over time due to the immense efforts of dedicated and brilliant individuals. The next big hurdle is the same old hurdle – making sure the records we fight to preserve have enough context that they will mean anything to those in the future. We could end up with just as severe a ‘digital black hole’ due to poorly selected or poorly documented records as we could due to records that are trapped in a format we can no longer access. We need both sides of the coin to succeed in digital preservation.

Did I mention the part about ‘Hurray for open source emulator projects with ambitious goals for digital preservation’? Right. I just wanted to be clear about that.

Image Credit: The image included at the top of this post was taken from a screen shot of Dioscuri itself, the original version of which may be seen here.