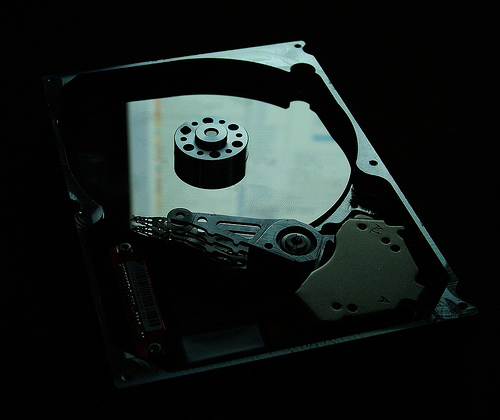 How many of us have an old hard drive hanging around? I am talking about the one you were told was unfixable. The one that has 3 bad sectors. The one they replaced and handed to you in one of those distinctive anti-static bags. You know the ones I mean – the steely grey translucent plastic ones that look like they should contain space food.

I have more than one ‘dead’ hard drive. I can’t quite bring myself to throw them out – but I have no immediate plans to try and reclaim their files.

I know that there are services and techniques for pulling data off otherwise inaccessible hard drives. You hear about it in court cases and see it on TV shows. A quick Google search on hard drive rescue turns up businesses like Disk Data Recovery

Do archivists already make it a policy to hunt not just for computers, but for discarded and broken hard drives lurking in filing cabinets and desk drawers? Compare this to a carton of documents that needed special treatment to permit access to the records they contained and yet are appraised as valuable. If the treatment required were within budgetary and time constraints – it would be performed. Mold, bugs, rusty staples, photos that are stuck together… archivists generally know where to get the answers they need to tackle these sorts of problems. I suspect that a hard drive advertised or discovered to be broken would be treated more like an empty box than a moldy box.

For now I would stack this challenge near the bottom of the list below archiving digital records that we can access easily but that run on old hardware or software, but I can imagine a time when standard hard drive rescue techniques will need to be a tool for the average archivist.