Centropa. org features video photo montages that combine Jewish family photographs with oral history. I found my way to Centropa from the Time.com article Old Nazi News Makes Headlines in Germany which includes Kristallnacht in Words and Photographs from Centropa, but Centropa’s mission reaches beyond recalling the Holocaust. Centropa bills itself as “an interactive database of Jewish memory”.

The first oral history project that combines old family pictures with the stories that go with them, Centropa has interviewed more than 1,350 elderly Jews living in Central and Eastern Europe, the former Soviet Union, and the Sephardic communities of Greece, Turkey and the Balkans. With a database of 25,000 digitized images, we are bringing Jewish history to life in ways never done before.

Their fleet of 140 individuals conducted extensive oral interviews and digitized thousands of old family photos. They are quite intent on clarifying that they do not create videos during their sessions with their interviewees. Instead, they record audio of their multi-hour sessions, transcribe these sessions and combine them with the digitized family photos to create their movies.

The juicy center of their website is found in the Centropa Movies which are alternately billed as a “library of rescued memories” and a “digital bridge back to a world destroyed”.  Their movies are also available via iTunes and on the CentropaOffice YouTube Channel. The movie I have included below tells the story of Judit Kinszki and focuses on her father Imre Kinszki, a budding photographer from Budapest, Hungary. From this movie’s Centropa Movie page you can also navigate to Judit Kinszki’s biography , the full family photo album and a study guide for this movie.

The amount of detail provided with each posted interview is really incredible. Biographies, detailed notes on each photo, the study guide, a family tree and a currently grayed out but promising link to “Discuss Movie”. This site has clearly given great thought to how to support teachers and has followed that vision through in the form of tons of supporting materials. Centropa has chosen the path of quality over quantity with the 17 movies currently posted.

Upon further reflection, I realize now that the movies are an outgrowth of the database of photographs and biographies. The detail was not added to support the videos – but rather the videos are the next step of evolution beyond the photos and interview transcripts.

In addition to the movies they offer a Recipe Archive, downloadable eBook versions of some of their interviews as well as Centropa Student, aimed at high schools in Europe, North America, and Israel. For those of you working on your own oral history projects, there is the Centropa Oral History Tool Kit, available in 5 languages. The Centropa Glossaries are less glossary and more a detailed list of people, social groups, events and terms that can be searched by country, type or keyword. Finally, don’t miss the ‘Narrated Stories and Introductions’ featured on the right sidebar on the Centropa Movies page, such as Maps, Central Europe and History or the Introduction to Centropa for US Students.

Reading Centropa’s claim that they are the first to combine the use of family photos and oral histories made me recall the University of Alaska Fairbank’s Project Jukebox. This project launched back in 1988 and aims to ” integrate oral history recordings with associated photographs, maps, and text.” The original was written using Hypercard!

They have a map showing all the communities in Alaska currently included as part of the project. A good example of an individual photo with accompanying narration is Harry Cook in his Garden from the Kiana Village History Project. No – it isn’t as elegantly assembled as the Centropa Movies, but the intention is much the same. They use old photos as a catalyst for helping individuals being interviewed and then combine the audio and images to improve end users’ understanding of the context of individual photos.

I have signed up with Centropa to be notified when they launch the promised ‘Add Your Family Photos’ feature. Until then I will keep scanning my own family’s photos, such as the one below featuring my grandfather (back row on the right), and working my way through all the Centropa Movies and their supporting materials. 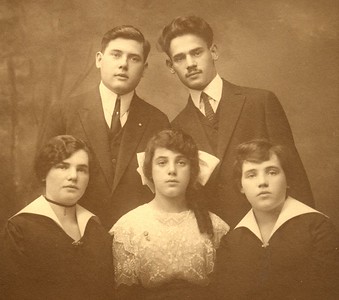