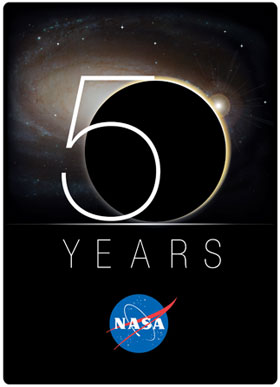 October 1st, 2008 marks the 50th anniversary of the National Aeronautics and Space Administration (NASA). It is interesting to contrast the feel of the NASA 50th Anniversary Web Site with the 15 NARA/NASA videos currently posted on Google Video, but my favorite site for celebrating NASA’s 50 year journey is the amazing NASA Images website.

I learned about this site on a tour of the Internet Archive while out in California for SAA 2008. It contains still and moving images from across NASA. For the first time these visual materials have been pulled together and methodically assigned appropriate metadata. This means that you can do really nice advanced searches and faceted browsing of search results. Before this effort, there was no standardized set of attributes describing these visual materials being created across NASA.

The NASA Images about page explains:

NASA Images is a service of Internet Archive ( www.archive.org ), a non-profit library, to offer public access to NASA’s images, videos and audio collections. NASA Images is constantly growing with the addition of current media from NASA as well as newly digitized media from the archives of the NASA Centers.

The goal of NASA Images is to increase our understanding of the earth, our solar system and the universe beyond in order to benefit humanity.

It goes on to explain that the Internet Archive receives no financial support from NASA and that NASA Images is currently funded through a grant from the Kahle-Austin Foundation. They are currently looking for new grants and sponsorships to fund upcoming projects.

Also, according to their published Terms and Conditions, they have made an effort to only include non-copyrighted images (though they don’t guarantee it). This is an amazing wealth of images and movies available for public use. The terms state that “You may use this NASA imagery for educational or informational purposes, including photo collections, textbooks, public exhibits and Internet Web pages (personal or otherwise). ”

I have embedded below footage of plumes of hot gas shooting across the surface of the sun. Check out this photo of the original 7 astronauts in their very shiny spacesuits from 1968. Happy Golden Anniversary NASA!