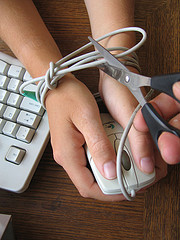 As more cultural heritage institutions add photos to Flickr, such as these sets added by the Smithsonian, an AP article discussing freedom of expression in online public spaces identifies some some issues that deserve attention. In ‘Public’ online spaces don’t carry speech, rights, Anick Jesdanun highlights a number of scenarios in which service providers (such as the Yahoo! owned Flickr) clash with their users, including this one (italics my own):

Dutch photographer Maarten Dors met the limits of free speech at Yahoo Inc.’s photo-sharing service, Flickr, when he posted an image of an early-adolescent boy with disheveled hair and a ragged T-shirt, staring blankly with a lit cigarette in his mouth.

Without prior notice, Yahoo deleted the photo on grounds it violated an unwritten ban on depicting children smoking. Dors eventually convinced a Yahoo manager that – far from promoting smoking – the photo had value as a statement on poverty and street life in Romania. Yet another employee deleted it again a few months later.

This image on Flickr gives more details about the photo being removed – and this is the reinstated photo in question. The article points out “Service providers write their own rules for users worldwide and set foreign policy when they cooperate with regimes like China. They serve as prosecutor, judge and jury in handling disputes behind closed doors.” It makes me wonder if the ‘unwritten guidelines’ are applied evenly across Flickr. With the creation of The Commons area, it would be easy to create two standards – one for the general public and another for ‘blessed’ institutions. Images that are acceptable from the Brooklyn Museum (consider this set of Behind The Scenes photos of the Ron Mueck exhibition) might not be accepted from the average person. In my research I discovered a set of Public Domain photos from the National Archives. Some of the photos included in this set are historically valuable images that I would not necessarily want a child to see. Does this mean they shouldn’t be on Flickr? I don’t think so, but that certainly isn’t up to me.

Here are the relevant passages of the Yahoo! Terms of Service:

You agree to not use the Service to:

That bit about ‘otherwise objectionable’ could be used to cover removal of anything. Being subject to the terms of service of Internet service providers is nothing new, but as archives, libraries and other cultural heritage institutions look for ways to increase their revenue streams and explore innovative ways to bring more eyes to their materials it will become more import to understand these guidelines.

I understand (as the author of the article that inspired this post also points out) that Yahoo! is a business. Their priorities are not always going to be the same as those of the National Archives or the Brooklyn Museum. There are definitely images from history and the world of art that are only appropriate for adults, but isn’t that what Flickr’s content filter feature, named SafeSearch, is all about? These are the three ‘safety levels’ available on Flickr:

Take the opportunity to filter your content responsibly. If you would hesitate to show your photos or videos to a child, your mum, or Uncle Bob, that means it needs to be filtered. So, ask yourself that question as you upload your content and moderate accordingly. If you don’t, it’s likely that one of two things will happen. Your account will be reviewed then either moderated or terminated by Flickr staff.

I am still not sure what safety level I would use for a photo showing rows of dead in a concentration camp. I guess given the choices, ‘restricted’ is the best option – but that still doesn’t sit right with me somehow. I did an advanced Flickr search for ‘concentration camp’ with SafeSearch on – and those photos are not currently being marked as restricted. Who is it that we expect to be protecting using SafeSearch? From Flickr’s definition above it is supposed to at least be kids (and maybe your mom and Uncle Bob).

I think the question of the moment is how to know which images are appropriate to upload if some of the guidelines are unwritten. Flickr is a community and understanding the community is essential to success within that community. Once you believe your images are appropriate to include, then you must decide the right ‘safety level’. It is not clear to me how to tell the difference between an image that is not appropriate to be uploaded to Flickr and an image that is okay but needs to be marked with a safety level of ‘restricted’. I am very interested to see how this category of ‘appropriate but restricted’ evolves. For now, I am going to keep a watch on how the Flickr Commons grows and what range of content is included. The final answer for some of these images may be to only provide them via the institutions’ web sites rather than via service providers such as Flickr.