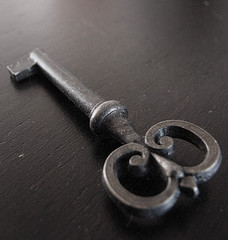 Dan Cohen posted yesterday about what he calls The Pirate Problem. Basically the Pirate Problem can be summed up as “there are ways of acting and thinking that we can’t understand or anticipate.” Why is that a ‘Pirate Problem’? Because a pirate pub opened near his home and rather than folding shortly thereafter due to lack of interest from the ‘very serious professionals’ who populate DC suburbs – the pub was a rousing success due to the pirate aficionados who came out of the woodwork to sing sea shanties and drink grog. This surprising turn of events highlighted for him the fact that there are many ways of acting and thinking (some people even know all the words to sea shanties without needing sheet music).

Dan recently delivered the keynote speech at a workshop at the University of North Carolina at Chapel Hill. The workshop brought together dozens of historians to talk about how the 16 million archival documents of the Southern Historical Collection (SHC) should be put online. He devoted his keynote “to prodding the attendees into recognizing that the future of archives and research might not be like the past” and goes on in his post to explain:

The most memorable response from the audience was from an award-winning historian I know from my graduate school years, who said that during my talk she felt like “a crab being lowered into the warm water of the pot.” Behind the humor was the difficult fact that I was saying that her way of approaching an archive and understanding the past was about to be replaced by techniques that were new, unknown, and slightly scary.

This resistance to thinking in new ways about digital archives and research was reflected in the pre-workshop survey of historians. Extremely tellingly, the historians surveyed wanted the online version of the SHC to be simply a digital reproduction of the physical SHC.

Much of the stress of Dan’s article is on fear of new techniques of analysis. The choppy waters of text mining and pattern recognition threaten to wash away traditional methods of actually reading individual pages and “most historians just want to do their research they way they’ve always done it, by taking one letter out of the box at a time”.

I certainly like the idea of new technologically based ways of analyzing large sets of cultural heritage materials, but I also believe that reading individual letters will always be important. The trick is finding the right letter!

And of course – we still need the context. It isn’t as if when we digitize major collections like the SHC that we are going to scan and OCR each page without regard to which box it came out of. We can’t slice and dice archival records and manuscripts into their component parts to feed into text analysis with no way back to the originals.

I like to imagine the combination of all the new technology (be it digitization, cross collection searching, text mining or pattern recognition) as creating keys to different treasure chests. Humanities scholars are treasure hunters. Some will find their gems through careful reading of individual passages. Others will discover patterns spread across materials now co-existing virtually that before digitization would have been widely separated by space and time. Both methods will benefit from the digitization of materials and the creation of innovative search and text analysis tools. Both still require an understanding of a material’s origin. The importance of context isn’t going anywhere – we still need to know which box the letter came from (and in a perfect world, which page came before and which came after). I want scholars to still be able to read one page from the box – I just want them to be able to do it from home in the middle of the night if they are so inclined with their travel budget no worse for wear.

Dan ties his post together by pointing out that:

… in Chapel Hill I was the pirate with the strange garb and ways of behaving, and this is a good lesson for all boosters of digital methods within the humanities. We need to recognize that the digital humanities represent a scary, rule-breaking, swashbuckling movement for many historians and other scholars.

In my opinion, the core message should be that we just found more locked treasure chests – and for those who are interested, we have some new keys that just might open those locks. I enjoyed the Pirate metaphor (obviously) and I appreciate that there are real issues here relating to strong discomfort with the fast changing landscape of technology, but I have to believe that if we do something that prevents historians from being able to read one letter at a time we are abandoning the treasure chests that are already open for the new ones for which we haven’t yet found the right keys. I am greedy. I want all the treasure!

Image credit: key to anything by Stoker Studios via flickr