Nurturing Fearlessness in the Face of Computers 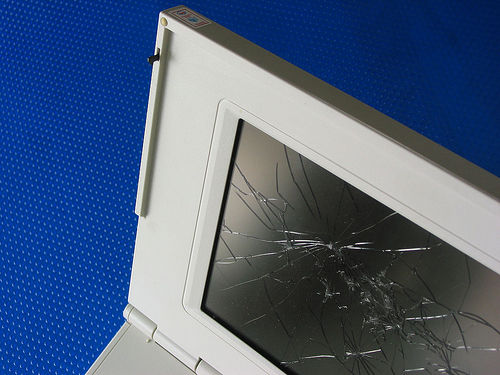 I have spent a fair amount of time thinking about what makes me different from those around me who proclaim themselves “not techie”. It isn’t that I know more about specific programs. I think it is that I am not afraid.

My friends and family always ask me to find them information online (or the best price for a new camera or the best airfare for their next trip) – and I really don’t think that I know better places to look online before I start. I think that I just don’t give up after the first two tries don’t work!

We talked about some of these ideas in the ‘Archives and Web 2.0 Technologies’ discussion at SAA2007 in Chicago. How do you get folks more comfortable with new technology? How to nurture fearlessness?

Dorthea Salo’s recent post, Training-wheels culture, got me thinking about this again.

Librarians are a timorous breed, fearful of ignorance and failure. We believe knowledge is power, which taken to an unhealthy extreme can mean that we do not do anything until we think we understand everything. We do not learn by doing, because learning by doing invariably means failure. So a librarian just won’t sit down with AACR2, Connexions, and the AUTOCAT mailing-list archive and work out how to catalogue a novel item. Nor she won’t sit down at the computer and beat software with rocks until it works.

I know I do have more experience with some things. Yes, I have spent years designing databases and years building software, but that doesn’t mean that I know how to use a database with which I have never had contact before. The difference between myself and many others is that I am not afraid to just try. I back up often and I give myself permission to make mistakes. There is nothing I can do (short of wielding a hammer) that will break my computer like the one in the image I included above.

So how do we get more archivists and librarians (those in school and those already on the job) comfortable with trying things when they sit down in front of a computer? I have a few ideas.

This approach would be akin to learning a new language by full immersion, and perhaps it might work well for the same reasons. What if a person was put in front of a computer with 3 programs they don’t know how to use, but have always wished they could get ‘trained’ on? And what if that computer had a handy button for the instructor to instantly reset the student back to a clean slate at any time? I really think a day (or even an afternoon) with the opportunity to play and know that you can’t break anything permanently could be very empowering.

There are self defense training courses that put a ‘mock attacker’ in a big padded suit and coach the student in how to attack them. Because of the big suit they can hit and kick and go full force but know that they won’t really hurt this person. At the same time they teach their body what hitting that hard would feel like. They teach their body how to react to defend itself when they need it. It may seem extreme, but I think that some people need a safe environment to try anything. Go ahead, see what happens if you try! Yeah – it won’t work sometimes.. but other times it will.

The class could start with a lesson in hunting for computer software “how to” answers online. Add some knowledgeable floaters to the room to prevent total frustration from taking its toll (but with strict instructions to avoid too much hand holding) and we might have something.

People know what a scavenger hunt is – so what if we harnessed that understanding and made them look for stuff online. What if they HAD to use some Web 2.0 style sites to find (and bookmark? and screen capture?) items on their list? 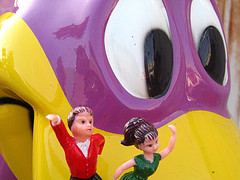 This sort of idea could be implemented remotely with new hunts launching on a specific date and time and with a firm deadline so people are urged to stick with it long enough to start feeling comfortable.

I think one of the saddest thing about the whole ‘Web 2.0’ label is that it scares people away. A scavenger hunt that happened to push you into the brier patch hunting for a creative commons licensed photo of a purple duck could having you using those tools before you remembered they were supposed to be threatening.

How Did You Do That?

I have noticed a pattern among those who don’t feel at home on a computer. They will often find one way to do something and then do it that way every time – forever. While I can understand the “if it ain’t broke, don’t fix it” mentality, I also cringe when I see someone take 10 keystrokes to do something that could take 2.

Now, take those same folks and make them watch me do something an easier way – either on their computer or at least with programs they are familiar with on my own. Things I don’t even think twice about can be a revelation. “How did you do that?” is something I frequently hear when I work in front of someone who takes pains to stay within their comfort zone when they use their own computer.

There are a number of different ways this could be implemented in the real world. I imagine a group of tech savvy volunteers willing to be a mentor to someone who works nearby. They could get together once a week for even just an hour – the idea being that the mentor drives and does WHAT the mentee asks to be done, but does it using shortcuts or hunts for the BEST way to do that activity through trial and error.

Screencasts are easy to make these days – so what if a different set of mentors were willing to make top five shortcut videos on a per task basis? I can imagine one on ‘top five shortcuts when surfing the web’ and another for ‘top five shortcuts to use on your Windows desktop’. There are certainly plenty of videos that come back on YouTube when I search on windows tips, but it would be more appealing if the videos were made using examples from the point of view of ‘our’ audience – libraries and archives. People can get their heads around new ideas more easily if the context in which they are learning is familiar.

The “Break Me” Challenge

I have a running joke with some of my friends (and many of those around me who write software) that given enough time, I can find a bug in any software I use. I expect this. I know (I was a developer, remember?) that all software has bugs. I know that the only thing a software company who makes something you need has to do is make their software less buggy than the other guy.

What if more people felt a new software tool was a challenge? I must admit, I do feel that way. For me, hunting for obvious bugs is like finding the edges of the world before I start exploring. What are the limits on what I can do here? I want to lift all the rocks and see where the bugs are wiggling so that when I actually must depend on the tool to do something for me I will know where not to step.

Could we create a workshop where people are taught this way of approaching software? I am not talking about teaching people to be pessimistic, rather to make them realize that even when they find a bug it won’t be the end of the world. Trying new things when you first start out rewards you with the knowledge of what your tool can really do. What do most people who buy a new kitchen gadget do when they get home? Find something to cook that requires the gadget. There is no guarantee that it won’t end up in the bottom of your drawer a month later – but at least people are willing to experiment with (and read the instructions for) cooking tools!

What all of this was part of an MLS student’s training? I know that there is a basic Information Technology course that is required in the MLS program at my school. I will admit that I didn’t take it (I took an Information Visualization course in the Computer Science department instead) – but I suspect that trying to break software and learn computer shortcuts wasn’t part of the training. No matter who teaches it, the syllabi for the core class always includes a sentence like ‘Become familiar with common information management tools’ in the list of their goals. I think there are a lot of assumptions about what people already know when they get to graduate school. I think we need to acknowledge that every graduate student is not equally comfortable with computers (even those young students right out of college). School is about learning – this should be the easiest place to spread these skills.

Andrea Mercado (of LibraryTechtonics fame) has blogged about both her Geek Out Don’t Freak Out classes and NetGuides program at Reading Public Library. The Geek Out classes are geared toward patrons who have some technology they don’t really know how to use – the digital camera with 50 settings when they only use 2.. or the PDA that they don’t actually know how to sync. The NetGuides are described on the RPL site as “students trained at the library to provide patrons with one-on-one technology answers and personalized instruction”. The topics they cover include basic computing, basic Internet, MP3 players and more (check out all the topics).

Both these examples are real world implementations for the ‘How Did You Do That?’ category above. It is so great to see examples of what can exist. I bet in some institutions there are staff members who need this support as much as their patrons.

Five Weeks to a Social Library was described as “the first free, grassroots, completely online course devoted to teaching librarians about social software and how to use it in their libraries.” I read blog posts from some of the librarians who went through this program (out of the 40 total who took it the first time around) – and they seemed to enjoy their experiences.

Learning 2.0 is an “online self-discovery program that encourages the exploration of web 2.0 tools and new technologies, specifically 23 Things“. I loved seeing that the original creators gave out prizes to their local staff at PLCMC who completed all 23 things (USB MP3 players). From the list on the right side of that Learning 2.0 page, it seems like the idea has spread to other libraries. The PLCMC folks also have created Learning 2.1 – complete with the fabulous tag line “Mashing up 21st century skills with lifelong learning”. They state that the site was created to support on-going learning beyond what was done with Learning 2.0.

Would You Volunteer? Would You Attend?

So.. lots of ideas. There are clearly a number of great programs already out there. Any folks out there want to chat about if they think my ideas would be helpful? Or doable? Or too intimidating? Or overly optimistic?

How can we build on the success of existing programs? Tell me encouraging tales of programs like NetGuides. Point me to other initiatives like Five Weeks and Learning 2.1. Is any of this making it into onto the radar of archivists?

Posted in learning technology, what if