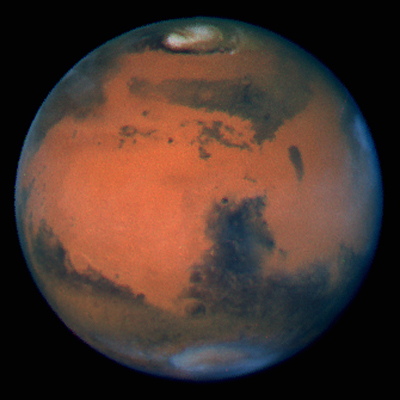 When the Phoenix Mars Mission launches (possible as early as this Friday August 3rd, 2007), it will have something unusual on board. The Planetary Society has created what they call the Phoenix DVD.

In late May of 2007 they proudly announced that their special DVD was ready for launch:

… the silica glass mini-DVD with a quarter million names on it (including all Planetary Society members) has been installed on the Phoenix spacecraft and is ready to go to Mars!

In addition to the names, the disc also contains Visions of Mars, a collection of literature and art about the Red Planet. The names and Visions of Mars were written to the silica mini-DVD by the company Plasmon OMS using a special technique. The resulting archival disk should last at least hundreds of years on the Martian surface, ready to be picked up by future explorers.

After the disc was written, a special label was applied to the disc to identify it for future explorers.

The page about Visions of Mars describes it as follows:

Visions of Mars is a message from our world to future human inhabitants of Mars. It will launch on its way to the Red Planet in the summer of 2007 aboard the spacecraft Phoenix. Along with personal messages from leading space visionaries of our time, Visions of Mars includes a priceless collection of Mars literature and art, and a list of hundreds of thousands of names of space enthusiasts from around the world. The entire collection will be encoded on a mini-DVD provided by The Planetary Society, which will be affixed to the spacecraft.

All this has been inscribed on a silica mini-DVD – and has the phrase “Attention Astronauts: Take This With You” in bright red letters on the front. I hate to be cynical (and those of you who read this blog know that it is not my nature to be so) but where will those ‘future human inhabitants of Mars’ find a DVD player to watch this DVD? I know I am not the first to doubt their plan – but I couldn’t resist. Given my suspicion of the whole affair I thought I would at least look into the company that created this very special disk.

Plasmon has an extensive website with all sorts of interesting tidbits. They explain their trademarked Ultra Density Optical (UDO) technology. They feature two PDFs – one called Archiving Defined and another labeled Plasmon Archive Solution. It looks very interesting. My VERY oversimplified summary is that they have combined a RAID approach with a very durable and secure WORM (Write Once, Read Many) flavor of DVD and packaged it into a solution for companies who need to ensure their data remains safe.

I have been meaning to learn more about the latest and greatest in hardware and material solutions aimed at digital preservation in the corporate world – and Boing Boing’s post Mars Library of books, DVDs, and database is now ready for launch just gave me a great excuse to start to scratch the surface.

I have also been following the blog StorageSwitched! for a while. It is written by the CEO of StorageSwitch LLC (“a technology provider for the fixed content data storage market with a multitude of gateway and utility products and services”). I have found it interesting to take a look at the business and technology side of preserving information. I plan more posts in this vein as I learn more about what is out there and how it is being used.